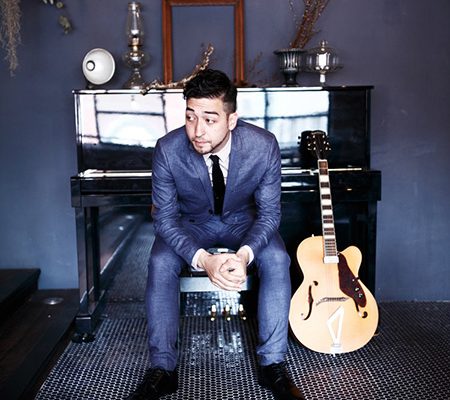 Kris Roche is a Kyoto-born singer-songwriter born under an American father and a Japanese mother. Following his high school graduation in Japan, he got admitted to the internationally renowned Berklee College of Music, and quickly started busking out on the streets in New York; which led him to play at critically-acclaimed venues such as Bitter End and The Living Room in just three years into his studies. Fluent in both English and Japanese, Kris aims to bridge Japan with the world through his simple yet catchy melodies that ring with a hint of pop.

He has so far self-released one single, two EPs, and an album entitled “Be Love” back in 2013. He has supported Japanese songstress Hikaru Utada on an NHK show called “Songs” in September of 2016, and has appeared on stage at Summer Sonic, Green Room Festival, Asagiri Jam, New Acoustic Camp, TED x Kyoto.

◼︎ Ross McCallum (Cajon)
Drummer, percussionist and YouTuber, Ross McCallum is best known for his modern and unique cajon playing style. His “Cajon Groove Guide” YouTube Channel, with more than 30,000 subscribers is popular destination online for percussionists. Since moving from Australia to Japan in 2016, Ross has landed on an exciting path while teaming up with various artists in the vibrant Tokyo music scene.