The most popularized association between Jazz and Japan might just be the one made through Haruki Murakami's novels, but it doesn't end there. Get a scope as we drive through some essential jazz spots in Akasaka and Aoyama with Japanese jazz artists: Ayaha, Meri and Sakuran. 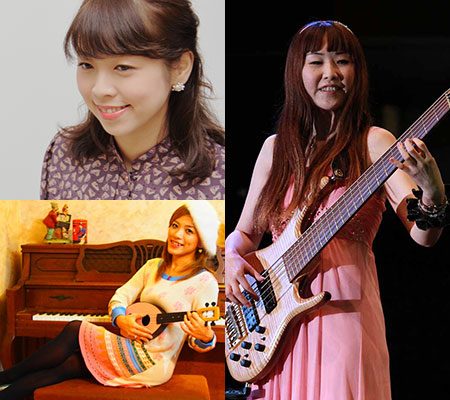 Spending her elementary, junior high, and high school years studying piano at a school that runs alongside Kunitachi College of Music, placing fingertips on a keyboard has been second nature for Ayaha since her early years. She consequently moved up to Kunitachi College of Music to obtain her B.A. in performing arts with a concentration in keyboard, whilst also taking up a course in jazz. Upon graduation, she took on the role as an assistant for the jazz course she took, which was followed by a travel abroad to New York where she further deepened her knowledge on jazz.

Apart from being the leader of her band, AYAHA trio, Ayaha is currently using her skill set to cover every musical ground possible: performing in a big band setting, classical concerts, musicals, all the way to supporting and recording pops, writing and arranging, and teaching.

Ameba Blog (Only in Japanese)

Surprisingly enough, MERI’s beginnings start off as a kid actress — including appearances on Nippon TV’s “Tamori to Issho” and “Omokagebashi” on TBS. However, by the age of 13, she had narrowed down her path to becoming a vocalist.

Participating in the L.A. Salsa Congress Musicians Seminar during her time studying at Sophia University, she was gifted the opportunity of being coached by the Grammy-winning Spanish Harlem Orchestra, which was then followed by an appearance on compilation album, “Salon de Latina” as Merido. News on her appearance was widely covered on Japanese media including Kanagawa TV “Mirai Kensaku”, TV Asahi and the Asahi Newspaper.

Her recent performances include her yearly appearance in Japan’s largest jazz festival, Imperial Jazz Complex, musical events hosted at Tokyo International Forum, and the Grand Exposition for Yokohama in 2009. She also holds kid jazz classes that have been highly reviewed, increasing her booking demands for nursery school, preschools, public facilities and jazz festivals.

In the meantime, she leads her own group, M&K, which takes “easy-listening jazz with a unique touch” as their theme, naming their idiosyncratic genre “MeriJazz”. While she’s not out performing, she takes on the task of writing originals, and is firmly set on winning a Grammy any time soon.

As a Yokohama-born bassist, SAKURAN has always had her mind set on playing the largest bass role in the big band. Graduating from Yamaha Music Foundation’s music school with a scholarship, she has not only pursued her big band dreams, but has since branched off to various fields including funk, latin and jazz. Her flexibility to adapt to any genre has led her to perform at Momoiro CloverZ’s Budokan performance, as well as supporting Yokohama Onsen Club, Akita Takanori & Samurai Big Band, M&K, CHARAN-PO-RANTAN to Yukaina Kankanbarukan, Mickey Curtis, Yagami Junko, and 923BigBand., She has also studied under professional wood bassist, Koushou Akimoto, showing listeners how there is no limit to achievement.