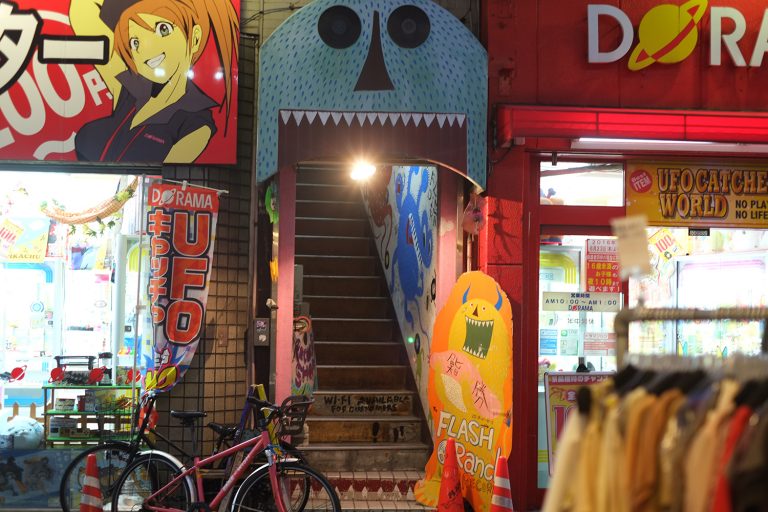 If you’re hungry for records in Tokyo, there’s nowhere as convenient as Shimokitazawa: record shops are dotted all over the area, regardless of whether you roll out from the north or south exit; you just need to know where to go. While that’s a given, the question here is: which one will suit your taste? We’ve gathered a number of shops that have aroused our ever curious souls – try them all or select the one that attracts you the most, but note that a full day is worth considering if you’re in for the whole ride. Dig deep into a selection of UK’s underground club music including genres such as jungle, sound system music and dubstep. The store is rather small with boxes thrown all over, packed with a plethora of imports arriving every week. Beer will be served during the summer because you’ll be staying for longer than a beer, at least.

Price: 1,400 yen~
Shop BGM while we were there: DJ DIE
Listening Station: ◯ Squeezing out between two arcades is this cute monster-like figure, with its mouth serving as the entrance to a relatively spacious area brimming with records from the 70s~80s. Packed with a variety of genres, expect everything from soul, funk, rock, pop and folk — prices vary with some starting at 100 yen, so here’s to cheap finds. Is it their low ceilings or their orange lights — or could it be their wooden interior? Whatever it may be, Noah Lewis’ Record is as cozy as a record store can get. Run by band Noah Lewis’ Mahlon Taits’ bassist Koya Abe, this record store specializes in oldies from the 20s~60s with records tucked in their record shop sleeves, because those existed back in the day. Whether it be a Bhutan CD-rom that also serves as a postage stamp or their “Mountain music from Kentucky” CD, their splendid selection of music from various continents will keep you endlessly curious. Records can be played upon request. Right along Shimokitazawa’s Ichibangai lies the extremely eclectic record store, OTONOMAD (which translates to “window of sound” in Japanese). Owner Mr. Yuji Takahashi mentions he’s readied a collection of music that listeners can repeatedly fall in love with, rather than what’s “current” or “in” as of now. Their collection leans more towards ones that are better listened to at home, rather than being played out on a dance floor; so here’s to your bedroom soundtrack. Turn into a narrow alleyway off of Shimokitazawa’s Ichibangai, and you’ll find Weekend Records past a worn down laundromat, on the bottom floor of an old apartment. Weekend Records initially opened in Williamsburg in Brooklyn, NY and was esteemed for owner Makoto Nagatomo’s astounding collection, gathering originals of samples by Idjut Boys and Theo Parrish amongst others. (Note: He’s even got a section dedicated entirely to “drum breaks”.) Aside from these, the store is packed with jazz, rock, and world music — though the store holds about 2,000-3,000 records, which isn’t much, you’re bound to be digging for a good while. He brought the same eclectic collection to Japan after closing down his New York location in 2013 — Weekend Records will be relocating in August of 2017. (Information to be updated.)